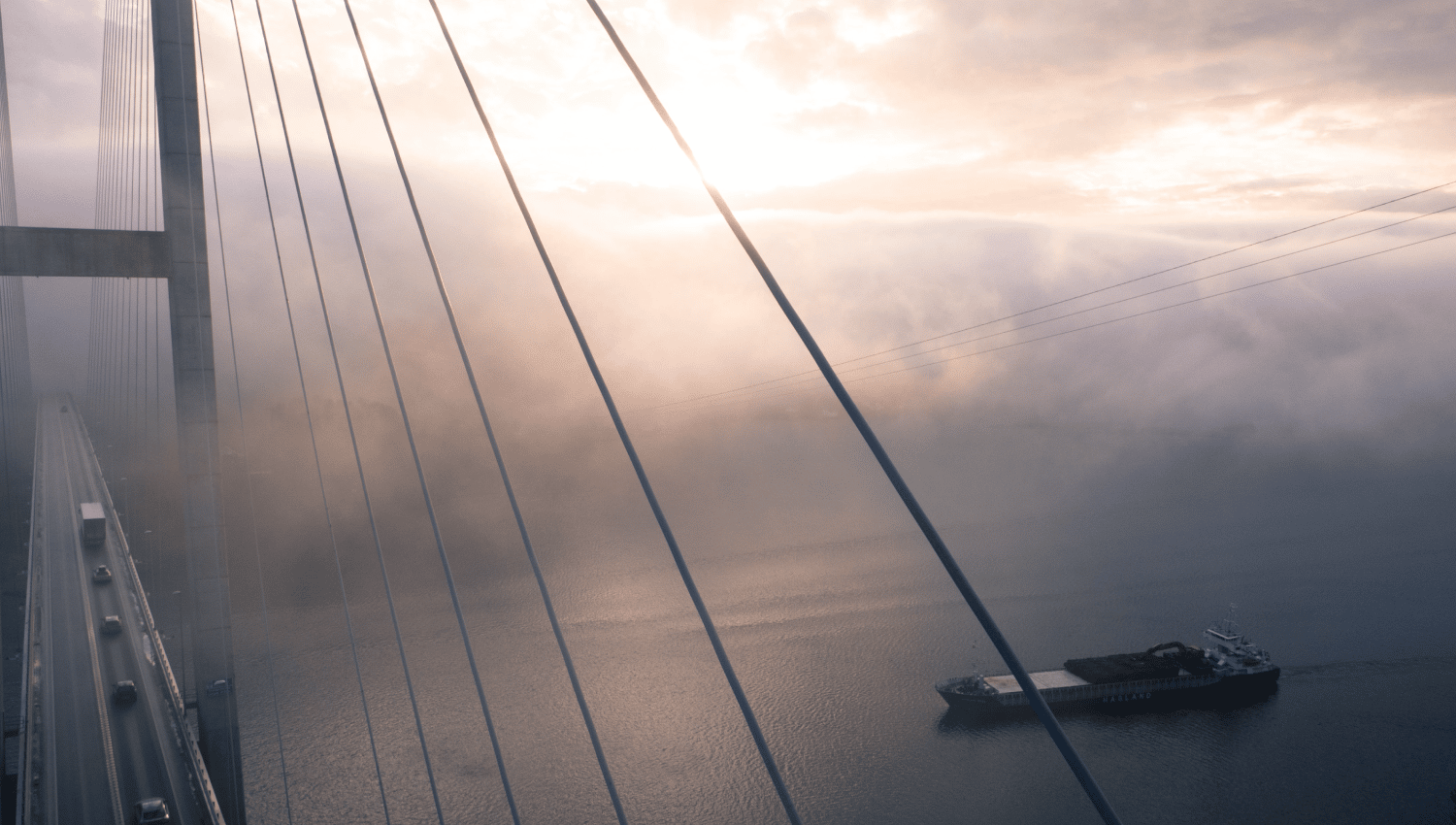 In transportation, everyone knows that bigger is always better; it’s why we have 18-wheelers and jumbo jets. So, it only stands to reason that ships, which still move about 90 percent of all global trade, would travel this route. Big time.

And, indeed, since their civilian introduction in the 1950s, container ships have grown with the kind of consistent bursts we normally associate with adolescents. A really big container ship in the mid-’50s maxed out at about 800 TEUs. By the 1970s, that max registered at 2,500 TEUs, by 2000 it was 8,000 and, when the CMA CGM Theodore Roosevelt glided, slowly, into the Port of New York and New Jersey, it did so with a capacity of 14,400 TEUs.

Officials at the Port of New York and New Jersey had literally planned and paid to move both heaven and earth to get the Theodore Roosevelt in dock. Like so many other port officials across the nation and world, they believe that the future of global trade will be found on the expansive decks of what some call mega ships, and that those not willing to make accommodations for those ships, could soon find themselves left behind.

And, like so many other ports which are currently or already have reconfigured, reinvested or recast their space to accommodate these mega container ships, New York and New Jersey did whatever was necessary and then took it up a notch. Quite literally.

Officials there knew that the Panama Canal’s expansion was now allowing for larger ships to reach the East Coast from Asia. However, stopping the ships from reaching New York/New Jersey was one of its most recognizable features: the Bayonne Bridge. You see, for all its many positives—its iconic look, its near-90 years of service—the world’s fifth longest steel arch bridge had been below average in one critical aspect: the size of ships able to pass below it. The bridge had a navigational clearance of 150 feet, which had increasingly become an issue with some bigger ships having to go to such lengths as folding down antenna masts or waiting for low tide to pass through.

Determined to maintain its standing as the nation’s third largest container port, officials knew something would have to be done to get the bridge’s clearance to 215 feet. There were a lot of proposals, everything from tearing it down to utilizing car ferries and tunnels but, in the end, the solution was simple and extraordinary: why not lift the bridge … up?

“It was a relatively new engineer who came up with it,” said Bethann Rooney, the port’s assistant director of Strategy and Innovation. “It was one of those ideas that when you first hear it, it almost sounds too simple. But then, it just made a lot of sense.”

The fact that a port official said raising a bridge “just made a lot of sense,” when the payoff was getting more mega ships, shows you how passionately many believe the ships are to the future of trade. Indeed, officials at New York/New Jersey will show you that, last year, 57 percent of arriving ships were 8,000 TEUs or larger, an increase of 44 percent from just five years ago. In fact, they’ll also point out that they hit record numbers of TEUs by actually servicing fewerships.

There are countless stories of ports announcing new projects and upgrades to accommodate the big ships: dredging channels deeper, building new terminals, purchasing bigger cranes. Consider that in 2016, Kurt J. Nagle, president and CEO of the American Association of Port Authorities, estimated that about $9 billion in dredging work would be required across the nation to handle the bigger vessels. That may sound like a lot, but Nagle added that another $29 billion needed to be spent on all manner of other infrastructure improvements.

However, some are starting to question whether all that investment as well as the considerable ongoing investment in maintenance will provide a sufficient ROI. Some believe the cost, whether environmental, financial or in labor drain, will ultimately be worth giving themselves and their ports over to the mega ships.

Consider the mood in South Louisiana, where the possibility of handling mega ships coming out of the Panama Canal has moved both public and private officials to propose a truly innovative idea: an off-shore port, built about two miles east of where ships currently enter the Mississippi channel, where, according to state Sen. A.G. Crowe, “there will never be a restriction regardless of the size of the ships.”

It’s a big idea, no doubt, one that supporters see will spur the building of more than $10 billion worth of terminals to handle everything from oil to cargo containers. Louisiana’s state government is so intrigued and excited by the idea, it has set aside about 2,000 acres of open water for the development of what is being called the Louisiana International Gulf Transfer Terminal.

At the port, the megaships would have their goods unloaded onto smaller “feeder ships,” which would span out to other Gulf Coast ports and up the Mississippi River valley. One of those ports would figure to be at New Orleans, where Gary LaGrange, CEO and president of the Port of New Orleans, thinks folks are getting a little too obsessed with big.

He’s said an offshore container facility had the potential of running into some big problems of its own, including hurricanes and the extra costs of loading the cargo onto smaller ships and financing.

“We don’t think there’s any need for it,” LaGrange says. “I understand that people are always looking for something new, something big, a new mousetrap, so to speak. I don’t see how it’s a feasible venture.”

Not that LaGrange doesn’t understand the need for going bigger. Since 2003, his own port has spent about $500 million to develop its container capacity as well as studied a method to place ballast on ships so they can sail under two downtown bridges.

It’s not only the rewards that port authorities are thinking of but the risk of being perceived as having fallen behind. Several years ago, the Port of Hong Kong began to notice it was being skipped for other ports with deeper channels and infrastructure that seemed more conducive to handling big ships. Whether the perception was true or not–the port has since been deemed able to handle big ships, though they have a continuing bridge issue of their own–in 2015 the port saw traffic fall by nearly 10 percent. That decrease dropped Hong Kong to the fifth busiest port in the world where, just a decade before, it had been the world’s busiest.

So, it’s not only important that your port can handle the big ships but just as important that everyone knows you can handle them. When, about a two years ago, the Port of Charleston welcomed the APL Yangshan, the largest container ship ever to call at the port, it was big news, partly because port authorities made sure of it.

“The deployment of New Panamax vessels to the East Coast trade marks a new era,” said Jim Newsome, SCPA president and CEO at the time. “Today, 16 of Charleston’s 26 weekly calls are handled by vessels 5,000 TEUs or larger, and we expect to handle our first 14,000 TEU vessel call later this year.”

The Yangshan’s milestone visit comes on the heels of the arrival of two new cranes to Charleston, boosting its big-ship handling capabilities at SCPA’s Wando Welch Terminal. The cranes offer 155 feet of lift height from the dock and would soon be joined two additional cranes of this height to be delivered to the Wando Terminal in conjunction with the completion of a $44 million project to modernize and strengthen the terminal wharf.

Just to make sure everyone knew what all this meant, Newsome said: “As the deepest harbor in the Southeast, Charleston is well-prepared to provide the depth as well as the capacity and infrastructure necessary for efficiently handling big ships.”

But, when it comes to the big ships, it’s more than a matter of if you build it (BIG), they will come. Once the ships arrive, they present all manner of challenges. For one, the sheer size and weight of them present all kinds of issues to the physical landscape of a port.

Consider that when the CMA CGM Theodore Roosevelt came into New York/New Jersey, it had to do it slow enough not to cause wakes that could potentially damage other, smaller vessels. Those same wakes could have created enough displacement to take things right off the docks. With such concerns, port officials decided to suspend loading passengers on any cruise ships departing from Bayonne, N.J., when the T Roosevelt was passing.

Others point out that the ships’ greatest strength, its ability to carry a large and concentrated amount of goods, almost makes it a very large, floating target for all manner of attacks, including terrorism and cyberattacks.

Then there is, perhaps, the most challenging aspect of all: getting the ships unloaded and loaded. Ports on the West Coast of the United States have been receiving the mega ships for several years and have helped provide a model for their eastern counterparts on how to handle matters. They also have been a testing ground for smoothing over the rough patches.

You see, while it’s very nice to talk about 14,000 TEUs and all, the fact is all that stuff has to be taken off the ship. If not done well, if not coordinated with a precision that borders on choreography–ship pulls in, crane takes container, places on truck or on rail, etc.–the process, or lack thereof, can literally paralyze an entire port. Soon, you can have ships waiting much longer to be unloaded, followed by shippers looking for more efficient ports. Remember Hong Kong?

All containers move from ship, to storage yard, to truck or rail. As the containers are moved out, other stacks are moved onto ships. With these bigger ships, even a small disruption can have a devastating effect on the flow of all of this.

It’s not just a matter of working harder or faster but much, much smarter. Planning is key. Consider that when the CMA CGM Benjamin Franklin pulled into the Port of Los Angeles at the end of 2015, it was, at 18,000 TEUs, that largest container ship to ever dock at a U.S. port.

But well before that historic moment, the port and labor officials had been in constant contact with the Franklin and others. They got information regarding the ship’s vessel stowage as well as its loading scheme in China and South Korea. By the time the big ship pulled in, they were ready for it. The Benjamin Franklin was turned around faster than expected. Whether that proves bigger is better remains to be seen, but it certainly seems to suggest that if you do go bigger, you’ll have to be better.