The ABC's of Canadian Trade 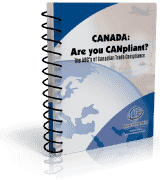 This U.S. – Canada trade book aims to present an overview of the processes involved in cross-border exportation between the U.S. and Canada. It addresses U.S. export, U.S./Canada cross-border, and Canadian import requirements. The reference book will help you understand the process and requirements for Exporting from the U.S. and Importing into Canada. Including the documentation requirements for US/Mexican Customs, how to avoid delays, Canadian Tariff Schedule & Trade Initiatives.

This guide will cover the following:

Global Training Center’s “CANADA: Are you CANpliant” was written by Trudy Wilson. Ms. Wilson is co-founder and President of InTran Industries, a small privately- held service organization developed to create for its customers a single point of contact to effectively coordinate, monitor and complete project requirements. In 1992 Ms. Wilson started her career working for Circle International in Lexington, Kentucky where she took her first step into the customs brokerage and logistics arena. Within the first year in the industry she was successful in passing the brokerage exam on the first attempt, thus becoming a licensed customs broker. During that time, she ran the only customs brokerage house in Lexington, Kentucky. In 1996 Trudy continued the development of her management skills when she moved to Emery Customs Brokers to open their customs brokerage office in Lexington. The year 2000 saw a promotion to brokerage manager of Emery Customs Brokers in Atlanta, Georgia which led to yet another promotion in 2002 to Regulatory Compliance Manager for the southeast brokerage offices, then re-named Menlo Worldwide Trade Services. The position was revamped and renamed Network Business Operations and Compliance Manager, where Trudy provided both compliance and fiscal guidance to a larger network of Menlo brokerage offices covering the entire eastern US, and including some as far afield as Salt Lake City and Seattle.

There are no reviews yet.

Only logged in customers who have purchased this product may leave a review.