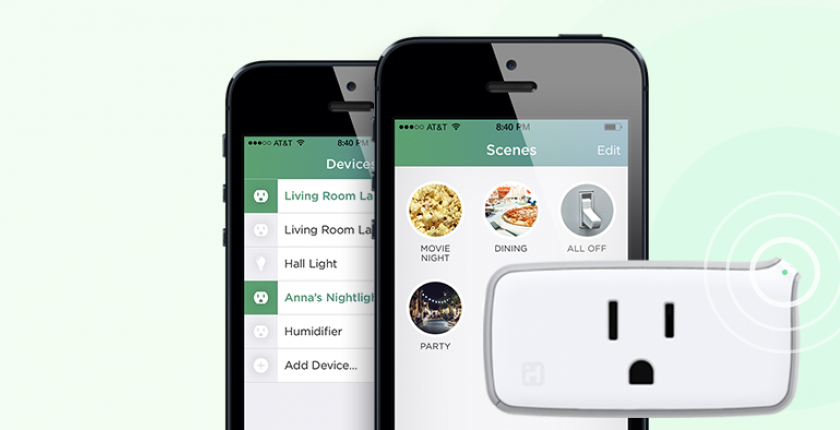 Maybe you already have one. Or ten. Perhaps you command them with a steady voice – “Alexa?” “Hey, Google!” – or you could be old school and just reach out and actually turn something on or off by hand. Whichever is your style, smart plugs and bulbs have invaded our homes, and they won’t be going away.

iHome SmartPlugs plug into an electrical outlet and allow for another electrical device to be plugged into the socket end. They come equipped with WiFi capability, a WiFi status indicator light, power indicator light, and button that turns the connected device on when pushed while simultaneously activating a search for a wifi network. Once the SmartPlug has been set up, users can turn the connected device on and off via a smart device app. This enables the user to automate on/off controls through timers and monitor the connected device remotely. Popular devices chosen for SmartPlug control include lamps, small appliances, stereos, and air conditioning units.

What is the difference between the iSP5 and iSP6 SmartPlugs?

Both the iSP5 and iSP6 are iHome SmartPlugs with a typical 3-prong electric plug on one end and a 3-prong receptacle on the opposite end. They are rectangular electronic devices encased in a plastic body. The difference between the two models is that the iSP5 cannot be controlled by remote control, whereas the iSP6 is capable of being controlled by a remote control device, though it is not imported or sold with one.

What is the tariff classification for the two iHome SmartPlug models?

There has been some confusion as to how the iHome SmartPlugs are classified by the HTSUS(Harmonized Tariff Schedule United States of America). Classification under the HTSUS is determined in accordance with the General Rules of Interpretation (GRI) and, in the absence of special language or context which otherwise requires, by the Additional U.S. Rules of Interpretation (ARI).

In a Rulings Request, SDI Technologies, Inc. (SDI) asserted that they fall under the HTSUS heading 8517 which provides for “Telephone sets, including telephones for cellular networks or for other wireless networks; other apparatus for the transmission or reception of voice, images or other data, including apparatus for communication in a wired or wireless network (such as a local or wide area network), other than transmission or reception apparatus of heading 8443, 8525, 8527 or 8528; parts thereof.” It is proposed that in HTSUS 8517, the SmartPlugs specifically fall under subheading 8517.62.00 as a machine for the transmission of data. They also may appear tobe classifiable under subheading 8517.69.00 as other apparatus for communication in a wireless network.

The U.S. Customs ruling found that the iHome SmartPlugs fell under heading 8537, which provides for “Boards, panels, consoles, desks, cabinets and other bases, equipped with two or more apparatus of heading 8535 or 8536, for electric control or the distribution of electricity, including those incorporating instruments or apparatus of chapter 90, and numerical control apparatus, other than switching apparatus of heading 8517.”

What Was CBP’s Reasoning in Determining the Heading 8537 and not 8517?

Heading 8517 covers, among other things, apparatus for the reception or transmission of data,including apparatus for communication in a wireless network. While the iSP5 and iSP6SmartPlugs contain circuitry that enables them to be connected to a wireless network, they do not transmit or receive data from the devices to which they are connected. Their primary function is to turn the electrical appliance connected to them on and off by controlling the electrical current,not the transmission of data. Pursuant to Note 4 to Section XVI, HTSUS, CBP determined that the components of the SmartPlugs that contribute to the transmission of data are intended to contribute to the clearly defined function of electric control, as specifically provided for in heading 8537, HTSUS.

What are the duty rates for the iHome SmartPlugs?

According to HTSUS 2020 column one, the Normal Trade Relations (NTR) general rate of duty for merchandise classified under subheading 8537.10.91 is 2.7% ad valorem. Duty rates are subject to change and the most recent HTSUS and the accompanying duty rates are provided athttps://hts.usitc.gov.

Pursuant to U.S. Note 20(f) to Subchapter III, Chapter 99, HTSUS, products of China classified under subheading 8537.10.91, HTSUS, unless specifically excluded, are subject to an additional 25% ad valorem rate of duty. In addition to subheading 8537.10.91, at the time of importation you must report the 9903.88.03 special tariff number for goods subject to the additional duty assessment of 25% ad valorem as a result of the Section 301 trade remedy. The HTSUS is subject to periodic amendment, so you should exercise reasonable care in monitoring the status of goods covered by the Note cited above and the applicable Chapter 99 subheading.

You may also want to read:

The Customs and Border Protection (CBP) is a state’s body. Vested with the power and authority to issue custom legal rulings. It also deals with other legal decisions that relate to the importation of merchandise.  The rulings enable the international trade community to understand how the CPB will treat a prospective carrier transaction or import. [...]

The Customs and Border Protection (CBP) is a state’s body. Vested with the power and authority to issue custom legal rulings. It also deals with other legal decisions that relate to the importation of merchandizes.  The rulings enable the international trade community to understand how the CPB will treat a prospective carrier transaction or import. [...]

How to Navigate the Section 301 Tariff Process

The Coronavirus pandemic has affected pretty much every aspect of life in the United States. We can now add trade policy to the list. As part of the Federal government’s efforts to address the spread and treatment of COVID-19, the Trade Representative’s office is considering exclusion of medical care products from the Section 301 tariffs on imports from [...]
CBP Export HTS Import International Trade Tariffs