Whose Problem Is It? Scenario of Incoterms® FCA

This fun little story provides an opportunity for me to share my handy-dandy Incoterms® Rules mnemonic RePO© (Responsibility, Possession, Ownership), which addresses three critical areas in a supply chain, and helps remind us of a critical lesson about Incoterms® Rules: they don’t address title transfer (ownership):

1. You may be Responsible for goods you neither own nor possess.

2. You may Possess goods you are neither responsible for nor own.

3. You may Own goods you neither possess nor are responsible for.

Mr. Smith worked at the company’s HQ and plant in a small town called Little Lake, in Michigan’s Upper Peninsula. One day he negotiated a sale to Mr. Jones for three pallets of PCBs. Mr. Jones wanted his trucker to pick up the goods at Mr. Smith’s plant, so they agreed to the terms FCA Little Lake, MI (Incoterms® 2020). It was agreed that title to the goods would transfer when the goods arrived at Mr. Jones’ plant in Toronto. The goods would be ready for pick-up in two weeks.

Two weeks later a truck hired by Mr. Jones arrived at Mr. Smith’s door. The product was loaded, the truck drove away and everyone was happy.

Then it rained. It poured. And something went terribly wrong. 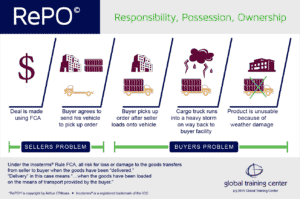 The roof of the truck started to leak, the water soaked through the cardboard shipping boxes and the PCBs were drenched. They were rendered useless.

Because title to the goods had not yet transferred from Mr. Smith to Mr. Jones, Mr. Jones complained to Mr. Smith that Mr. Smith had to provide a replacement shipment of product. In other words, because Mr. Smith still owned the PCBs, the fact that they were ruined in the rain was his problem.

So, whose problem is it?

1. Mr. Smith, because he still owned the goods

2. Mr. Jones, because the goods were on his truck

3. Mr. Smith, because he wanted to please his customer

4. Mr. Jones, because he ordered the goods

When Mr. Smith provided a copy of Incoterms® 2020 to Mr. Jones, he arranged for the two of them, while on the phone with each other, to look in the book together.  That’s when Mr. Jones learned exactly what he agreed to, and was forced to accept his responsibility for the damage to Mr. Smith’s product.

Mr. Jones has hired a new trucker.  He is still Mr. Smith’s largest customer, and the two remain friends.  Occasionally they meet for a beer to recount this incident with laughter and the wisdom that can only come from experience.

Arthur O’Meara is an instructor for Global Training Center and is a frequent speaker in North America and Europe, both at public conferences and at seminars. He has attended the ICC’s Incoterms®
Masterclasses in Paris, France and is a US Licensed Customs Broker. He obtained his MBA from DePaul University in Chicago. To learn about Arthur and his services visit: http://globaltrainingcenter.com/instructors/arthur-o-meara